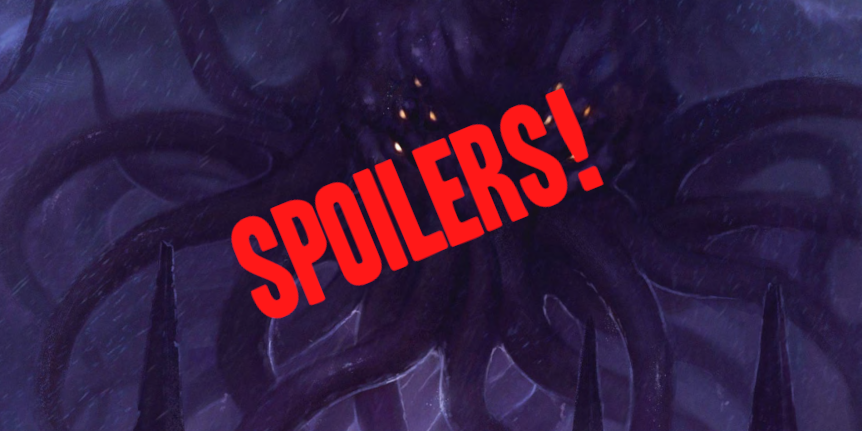 The Fog-spawn (or Thing in the Fog) is an other-dimensional creature from the Masks of Nyarlathotep campaign for Call of Cthulhu. If you’re a player in that campaign, turn back now: there will be spoilers!

Now that the players are gone…

The approach I’m taking in this post is to asume that the Fog-spawn is an evolved creature, with instincts and tactics based on its natural environment. It’s been pulled into an unfamiliar place, our dimension, through magic: so it’ll have to adapt.

First, let’s start by listing what we know:

Based on that, here’s a likely profile of the Fog-spawn’s natural environment and behaviour:

Its natural habitat is dark, it waits silently and invisibly for victims to approach, whereupon it grabs and starts choking as many of them as it can. If there are fewer than 6 victims, it’ll use the left-over tentacles to restrain them, likely starting with the biggest (with only 5 INT it’s only smart enough to use a basic proxy for strength, such as physical size).

After killing the victims it’s currently holding, it can chase after any which escaped (or which it couldn’t first grab), choking and killing them too. But, since it doesn’t need much food, it won’t chase very far if it’s already made a kill, and it won’t chase before killing the victims it’s currently holding as that would risk losing them too. It then eats its fill, and sits around waiting for a few more centuries.

This approach would work in our dimension too, especially as we’re not used to invisible tentacle monsters. But there are two extra things it’s got to contend with:

So, that’s pretty much it for how it fights: it’s an ambush predator, which uses its invisibility and speed to attack unsuspecting victims; it tries to choke as many victims as it can (up to 6), using left-over tentacles to restrain larger victims; and it concentrates tentacles on victims which are strong enough to break free.

I like using characteristics like the size of the player characters, because it’s something that players don’t think about very often, even though it’s really obvious to the characters themselves.

The last thing to talk about is the Fog-spawn’s intelligence. It has 5 INT, which is low, but it’s smarter than, say, a dog. It has a miniscule chance of solving a puzzle, or doing some other reasoning-based task.

In Masks of Nyarlathotep, the cult might send a Fog-spawn after the investigators in London. London is a pretty busy city, so clearly the Fog-spawn is supposed to be smart enough to know who and who not to attack, and to be able to track them down.

I think that its intelligence isn’t enough for it to significantly adjust its combat tactics—it’s got one trick, and that normally works well for it—but it is enough to somewhat train it, and give it simple commands like to hunt down and attack a particular investigator. Though I think it would have to do that hunting based on clearly apparent information, like colour or smell, and the Fog-spawn would be easily confused by even changing your coat.

But this means that a Fog-spawn is a viable guard, if you don’t have any instructions more complex than “kill anyone not wearing robes.”