Troika! is British science-fantasy roleplaying game, with a free SRD, usually lumped in the OSR sphere even though it’s descended from Fighting Fantasy and not D&D.

The implied setting is more of a super-far-future blend of sci-fi and magic like The Book of the New Sun and Dying Earth, with hints of Discworld, than it is Lord of the Rings. This isn’t your typical fantasy roleplaying. 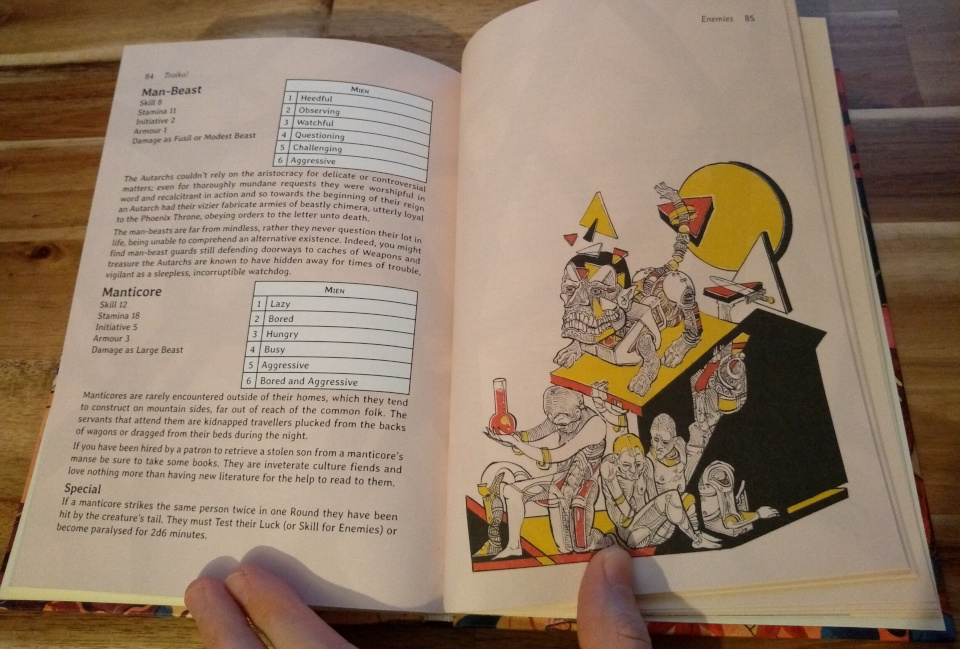 The book itself is physically really nice. Good thick paper, light coloured backgrounds with tables having a plain white background (so they really stand out), art in a weird but fitting style, and it’s a hardback despite being short.

The core of the system is nice and straightforward. It’s an attributes-and-skills system, but only has a few attributes. There are two slightly different core resolution mechanics, one for opposed situations and one for unopposed, where you roll 2d6 and compare it with your stats.

There are no D&D-style attribute modifiers, or saves, or levels. There is an experience mechanic but it’s not experience points: like Call of Cthulhu, when you successfully use a skill, you mark it, and then in downtime you can try to improve what you marked.

At first the lack of saves threw me a bit. I was planning to run some OSR content, and that stuff has “save vs X” all over the place! But it’s actually pretty straightforward to translate saves to skill checks:

The rulebook encourages GMs to make up new skills as needed, and the provided Blancmange & Thistle scenario gives an example of that for holding your breath. Having weird niche skills isn’t a problem in Troika!

The weirdness of Troika! isn’t confined to its setting, some of the novelty budget gets spent on interesting mechanics:

Most of what differentiates PCs in Troika!, at least to start with, comes from their background. These consist of a paragraph or two of lore, a few items, some skills, and spells.

Character backgrounds in RPGs can often feel kind of boring. Game designers try to make each one appeal to a broad audience, and making your own is generally hard (I’m sure we’ve all heard horror stories of players insisting on using some horribly unbalanced homebrew race or class).

Contrast that with Troika!, where each background is evocative and mechanically simple, and also just plain weird. For example: 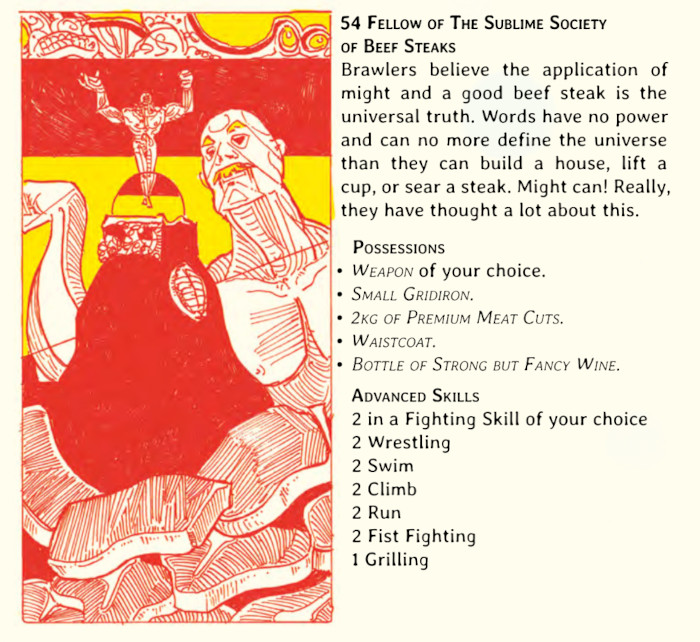 There’s a Grilling skill. Why is there a Grilling skill? What could it be useful for? I don’t know, but simply seeing it on the page has got me thinking about what sort of kitchen-related challenges I might be able to feature in a game.

As a player I’ve never thought about this sort of character before, but my mind went immediately to Armstrong and Curtis from Fullmetal Alchemist.

There are 36 of these backgrounds. Many of them reference people, places, or things which don’t get further explained. Troika! is great for implying a setting without expecting you to learn a bunch of detailed lore for the setting.

And I really like that. When a game has an established setting, I feel like I’ve got to learn it before I can run the game, or I’ll end up introducing inconsistencies. Learning the lore of this fictional place becomes homework, and I’ve never much enjoyed geography or history. Much better to give snippets of a setting which I can flesh out into a more complete thing at the table.

I wrote up my own adventure to run, which I’ll publish in a separate blog post.

I think the hardest part was getting the tone right, as I’d not run a wacky science-fantasy game before. The Blancmange & Thistle scenario in the book was a great help, as I was able to crib ideas from that. It’s full of small details like “a thick green carpet floor that you sink several inches into” which are strange (why is the carpet so deep?) and slightly uncomfortable (that carpet must be gross).

There’s also a wealth of Troika! scenarios on itch.io, for example the recent Great Troika! Pocket Sphere Jam!, so even if the rulebook hadn’t come with an example scenario I’d have been able to make do.

The only thing I felt was missing were some guidelines for converting content, particularly monster statblocks, from other OSR games, which tend to be based on D&D. Perhaps that’s a bit unfair of me. For instance, I wouldn’t expect a fantasy game based on the Call of Cthulhu system to come with D&D conversion instructions. But Troika! is often lumped into the general OSR sphere. I ended up making up some rules which worked for the particular scenario I ran.

It was nice and simple. The rules aren’t complex, and once I’d got everyone’s inventory sorted out we were good to go. The players needed to ask “is this a roll under or roll versus?” a few times, but there was never any difficulty for me to resolve that.

Playing into the weirdness of the system was great. One PC found a mysterious vial of blue liquid, asked if they could tell what it was, and I just made up a skill: “I don’t know, make a Liquid Identification check.”

The game wasn’t as lethal as we expected, but that was partly my fault and partly luck, as the first part of the scenario was Emmy Allen’s Gardens of Ynn, a randomly generated garden-based adventure, and they just didn’t get many hostile monster encounters. Only one in fact, and they didn’t have much difficulty in dispatching the ambulatory rice pudding which took umbrage to their presence.

Our sessions are only three hours long. If we had longer sessions I’d have extended the garden part, which would probably have upped the danger.

We all enjoyed it, and I expect we’ll be running another Troika! one-shot, probably with fresh characters, in the future.