This is a short adventure I wrote for my group’s first experience of Troika!. Here’s the prompt I gave them:

Your patron has sent you to a distant sphere, inhabited by Mazirian, a mighty magician. None have seen him for centuries, and so he is presumed long-dead.

You are to retrieve a priceless artefact: the lens from the eye of a god, which has the power of focusing on anything in creation, no matter how distant.

But there will be magical booby traps, who-knows-what spells, and possibly even enslaved demons, in your way.

There are two parts to this adventure:

The game starts with the party arriving at the entrance to the gardens along with their hirelings (give them suitably weird names, like “Precious Thimble” and “Skulldeath”).

If the players run out of hirelings and need a new character, they can find a changeling in the gardens, or a sleeping guest (who has been asleep for a very long time) in the manse. See the end of the post for the changeling background.

The Gardens (of Ynn)

The manse is the first location encountered in Depth 5, or whatever works best with the time you have, and can always be seen in the distance rising above the hedges and trees.

At the entrance there is a sign asking you to “please respect the rules” and to “please donate towards the upkeep of the gardens”.

The donation box says “5” on it. The PCs have a variety of currencies and denominations in their pockets. If they enter without donating a suitable amount, they hear a disembodied tutting.

Some Ynnian effects attack the character’s psyche, represented numerically as their Sense of Self stat. The starting value is Charisma + Constitution. If using the “highest 3 of 4d6” approach to stat generation, this is a slightly skewed normal distribution centred on 25.

Troika! does not use the standard D&D six attributes.

Instead, use Skill + Luck + 10. This has a smaller standard deviation, but the right centre. Except for the Zoanthrop, who double their Sense of Self: their stunted mind shields them from memetic attacks.

Troika! does not use saves.

For things which a character could actively try to resist or avoid, use a skill test (page 40).

For things which are just up to chance, use luck (page 40). 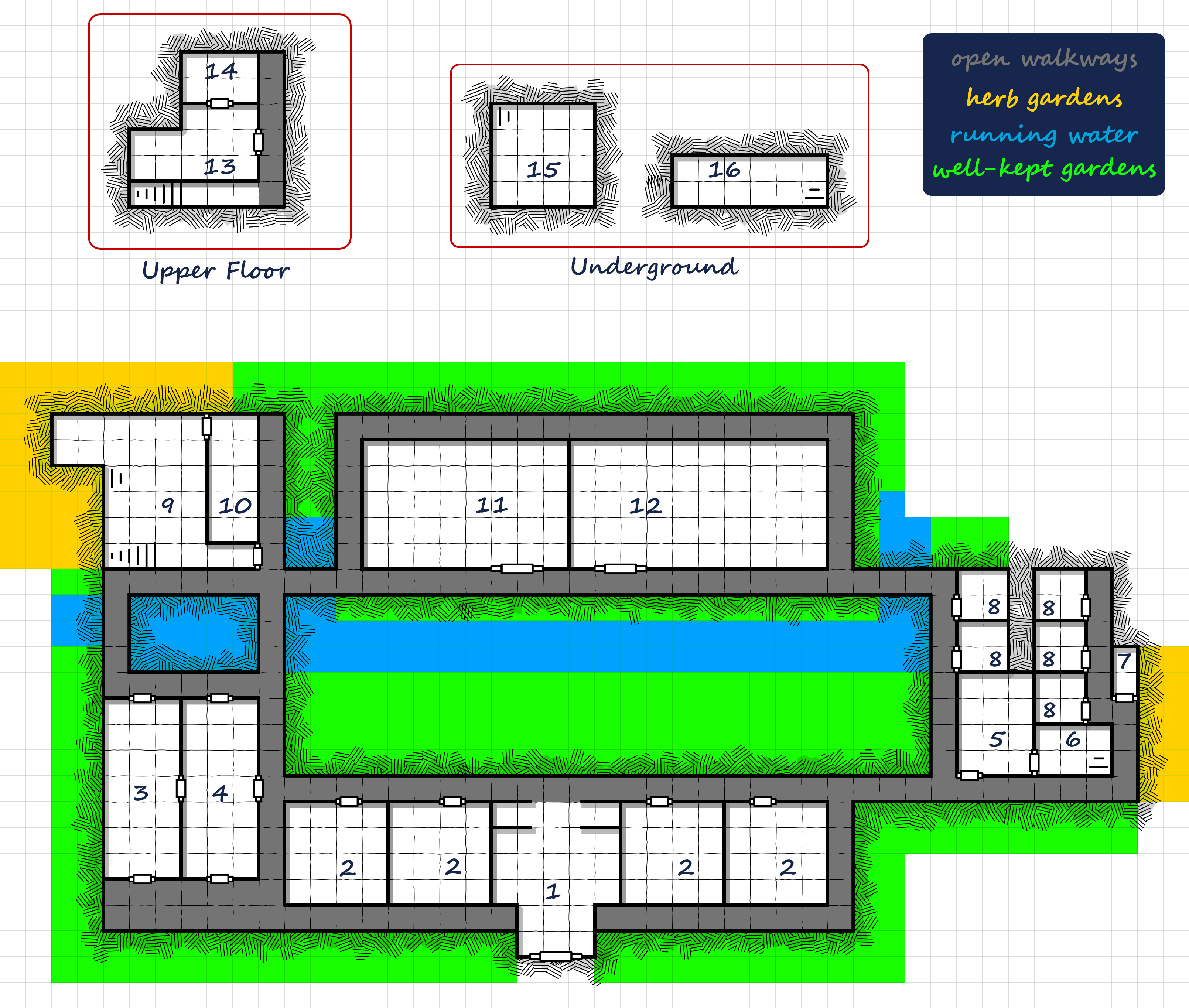 The main source of danger in the manse is a protective spell which guards its contents.

If a PC tries to damage something, as they attack whatever has caught their attention they rapidly turn into a pile of rats: first growing a long tail, then whiskers, then finally exploding into a dozen rats. Two cat statues in the waiting hall animate and chase down the hapless PC.

A be-rat-ed PC returns to normal after avoiding harm for 10 rounds, at which point the cats lose interest and turn back into statues.

Listed in the Gardens of Ynn book. See the conversion notes earlier.

Fiercely protective of the manse and its contents, but kind of stupid. These automata will chase down any PC who has been turned into a pile of rats, but will lose interest the moment the PC recovers.

A collection of tiny humanoids who dwell within the carpet of one of Mazirian’s guest rooms. The imps tolerate them because they eat dust. They will regard the arrival of a PC as the arrival of the prophesied Great Foot, herald of the end times.

Utterly servile, obsessed with cleanliness (except in their private spaces), and still following the last commands Mazirian gave to them before his death. They don’t have a very good grasp of time, so they haven’t yet noticed that their master hasn’t left his bed in a while.

Just a regular owl who, much to the annoyance of the imps, has decided that the library is a fine place to nest.

Whose skull is it? Why is it here? These and other questions will have to remain unanswered, as you can’t have memories without brains, and the skull is sadly lacking in that department.

Strangely aggressive thorny vines which have invaded from the magical gardens. They have no eyes, detectable ones at least, but they react violently to nearby motion.

Rather than write a mien table for everything, I made three templates.

From Troika! - Mucking about in the Gardens of Ynn:

You’ve been marooned in the Gardens for quite some time. Perhaps you were a foolhardy adventurer or inquisitive gardener. Perhaps you wandered here as a child and have known nothing else. Trapped here in the Garden for so long, you’ve adapted to your new home a little too well and aren’t entirely human anymore. On the bright side you’re aren’t entirely a strange vampiric fey yet! It’s just that your tongue is forked and your skin is a tad pale (or is it mint green?). Your ears are a little more pointed, your limbs too long, and your hair is now a brilliant colour. Your voice even seems to have an undertone of birdsong. And who knows how alien your physiology has truly become on the inside.

You don’t recover Stamina by eating a Provision—instead you may consume a mouthful of blood (1d6 Stamina from any willing or unwilling volunteers) at most 3 times per day to recover an equivalent amount of Stamina.

You cannot recover Stamina in sunlight but recover twice as effectively in darkness and are severely allergic to iron and holy objects. You take double damage from such sources and take damage while touching or carrying such objects. Don’t even try to go on holy ground.

If you are reduced to negative Stamina, instead of dying you are transformed into a patch of flowers or mushrooms growing where your body falls. Regain 1 Stamina twice per day (sunrise and sunset) until you are fully healed. You return to flesh when your Stamina is fully recovered or blood soaks into the ground you’re growing in. A stake in the heart prevents this and freezes you at 0 Stamina until it is removed. Churning up the soil you’re growing in destroys you forever.