The “Trying again” section was initially incorrect, and said that a task chain was better than pushing the roll in some situations.

When a PC wants to do something, the GM might call for a roll to see whether they succeed or, if success or failure is a given, how well they do.

In Traveller, the player rolls 2d6, adding their characteristic modifier, skill level (or a penalty of -3 if they lack the skill entirely), and any other modifiers the rules specify, generally against a target number of 8. In situations where there is no relevant skill, the player just adds their characteristic modifier: for example, forcing a door open would just be 2d6 + Strength Mod. 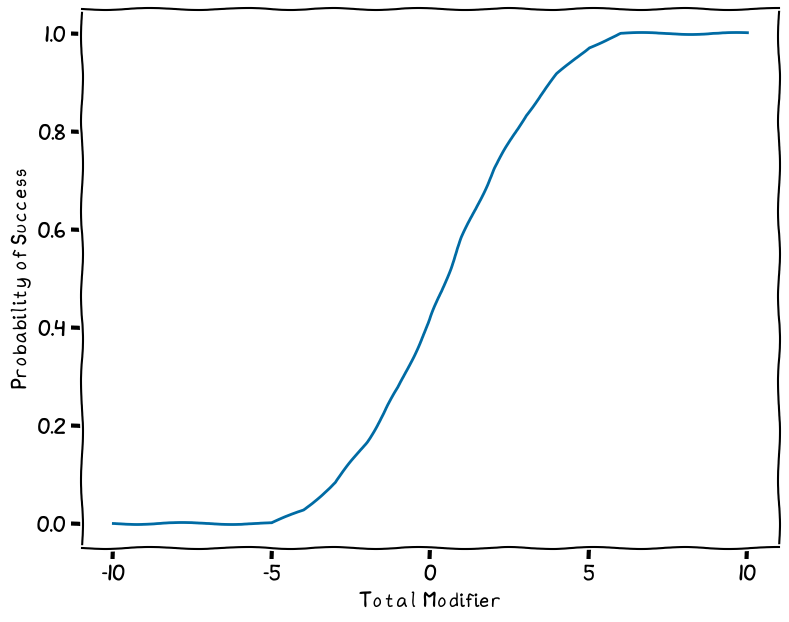 The average result for 2d6 is 7, but the usual difficulty target is 8. The average characteristic modifier is 0, but finishing character creation with skills at level 1 or 2 is easily doable, so almost all characters do have situations where they have even-or-better odds. Even odds isn’t that great in a risky situation though, so the rules implicitly encourage players to seek out other bonuses, or to change the situation to be safer.

For the graphs in this post, I’ve make some assumptions about the ranges of modifiers:

Checks have eight difficulty levels, with the target number increasing by 2 every level from Simple (2+) to Impossible (16+). 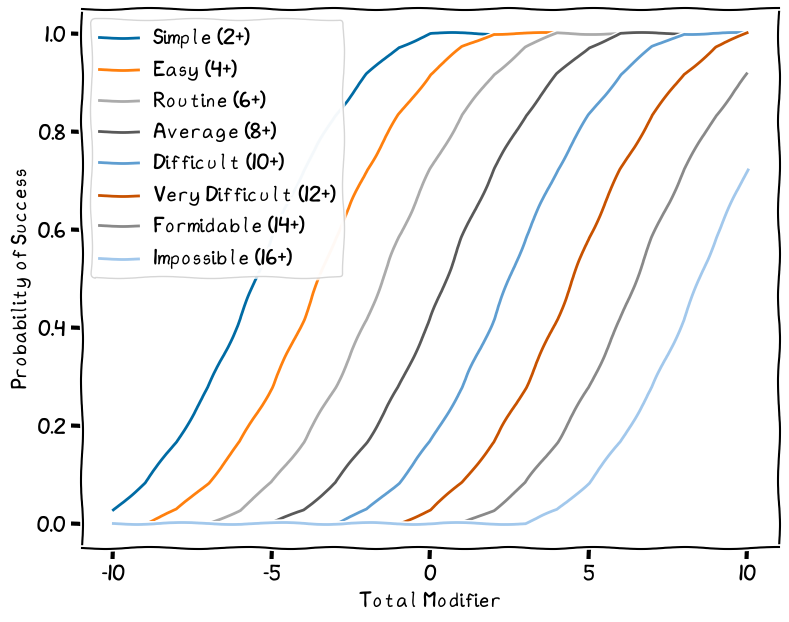 On the one hand, I like having different difficulty levels to pick from. On the other hand, this feels like too many. I’m a big fan of only rolling when the outcome is in doubt, so I’m not sure when I’d ask for a roll for a Simple or Easy task. Even a Routine task feels a bit much. I’d probably have the PCs succeed automatically at all of those (though, with a caveat: see the next section on timeframes).

“Impossible” is also misnamed, as you just need a +4 total modifier, which is achievable with a bit of luck in character creation, to have a chance of success: “impossible” should mean “impossible”.

Rolling a 16 won’t let you punch a hole through a starship with your bare fists.

One thing I like a lot about the Traveller task check system is that it has rules for increasing or reducing the difficulty of a task check by going faster or slower. In most systems, that’s kind of up to GM fiat, but here it’s codified.

There are a few small examples given for each. For example, applying first aid takes minutes, whereas repairing a damaged ship takes tens of hours.

So, while I would not normally make someone roll for a Routine task, I likely would still have them roll if they were doing an Average task one step slower than usual.

There’s an optional rule for using the effect to pick a degree of success, if the situation requires more nuance than just a binary pass or fail:

An alternative way to think about Traveller task checks is that you’re trying to roll an effect of 0 or more. So, there’s a fixed target number you want to equal or beat, and the GM has eight possible penalties he can subtract from your roll depending on the difficulty of the situation.

Is that a useful way to look at the rules? When actually playing, probably not. But for this post, it means I don’t have to draw eight separate difficulties in all of the graphs. 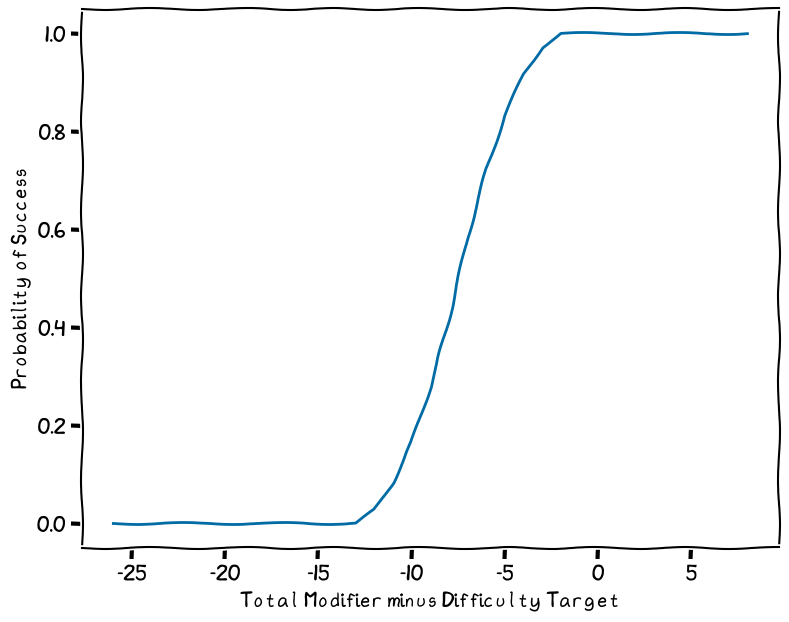 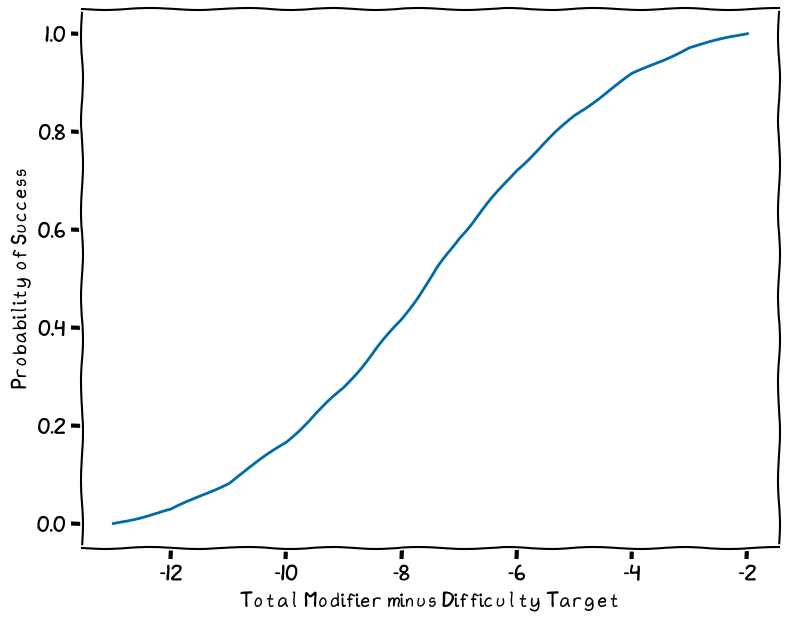 This is the formulation we’ll use going forwards.

Let’s say that a PC is trying to hotwire a locked-down jump drive.

Perhaps our would-be pirate has an easy time of it. Maybe they’re blessed with a particularly competent assistant; or there’s a detailed diagram explaining exactly how the lock works.

On the other hand, perhaps they have an unusually hard time. Maybe the engine room is really small and awkward, so the PC can’t get a good look at the mechanism; or they have shoddy tools.

In these cases, the skill-based task itself (hotwiring the jump drive) is exactly the same, it’s just the circumstances around it which vary. So making the task check easier or harder doesn’t really fit.

To handle this sort of situational effect, the GM might give the player a boon die or a bane die. The player now rolls 3d6, keeping the better (or worse) of the two rolls. Or the GM might say that success or failure is impossible given these additional situational factors, and so remove the roll entirely. 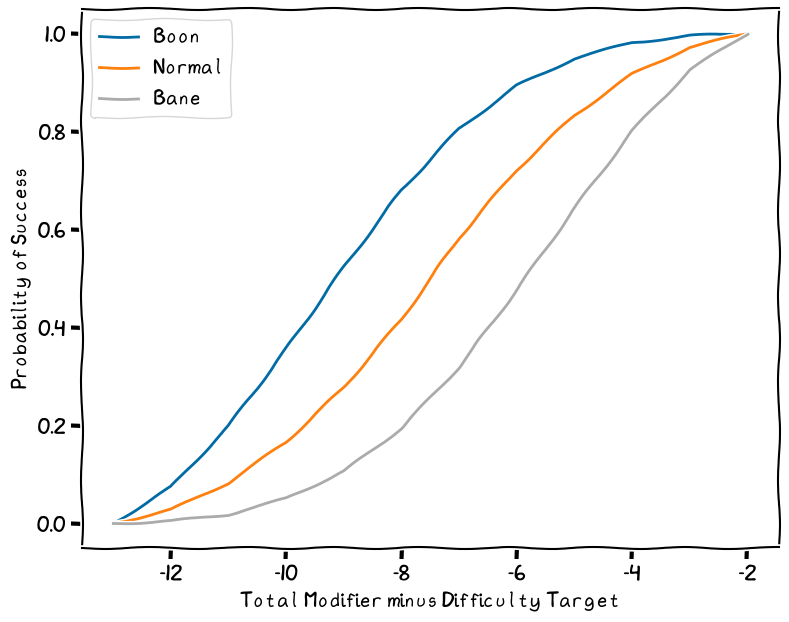 Let’s say that the PCs are preparing to jump to another system: the astrogator plots the route, then the engineer inputs it into the jump drive. The quality of route should affect how well the engineer is able to configure the jump drive, and Traveller handles this sort of thing with “task chains”: a sequence of connected task checks where the effect of a check applies a modifier to the next check in the chain.

First, let’s have a look at the chance each modifier has of coming up: 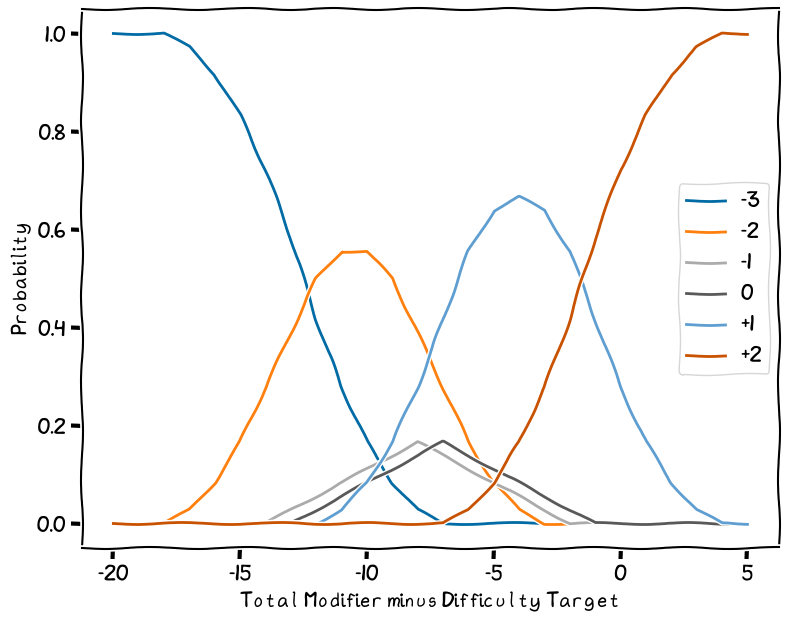 I find this pleasantly asymmetric.

Now, let’s look at the chance of the second task in a chain succeeding. Here, the Total Modifier in the Y axis does not include the task chain modifier from the first check (that’s why this is a heatmap and not just a line chart). The colour shows the chance of succeeding on the second check: lighter is better. 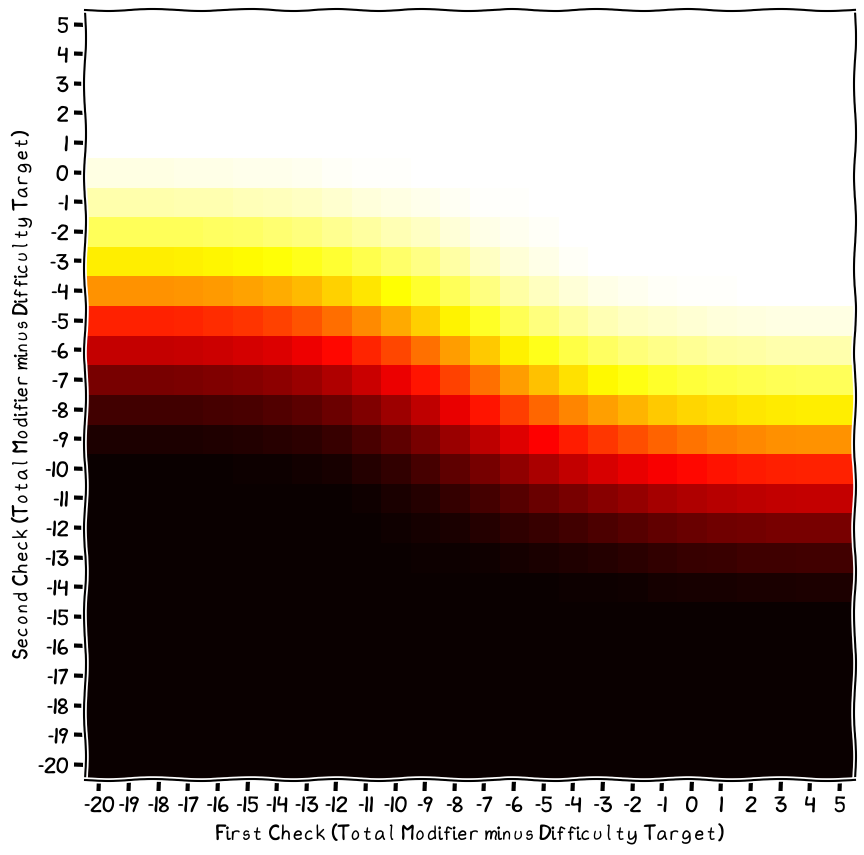 So, with a huge penalty, the players will need to seek out some other advantage: like going more slowly and carefully, reducing the difficulty at the cost of time; or finding some advantage which gives them a boon.

Compare with what it would look like if the second check just used the effect of the first check as a modifier directly: 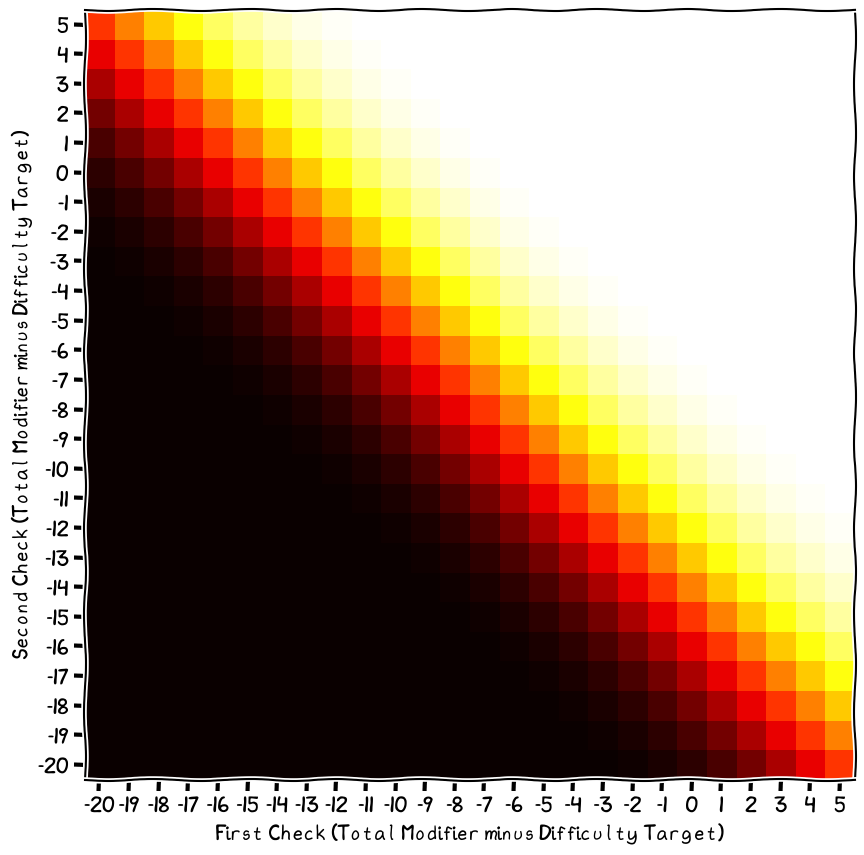 Unlike Call of Cthulhu, Traveller has nothing like pushing a roll. So if you want to allow a player to try a task check again, you’ll have to improvise. 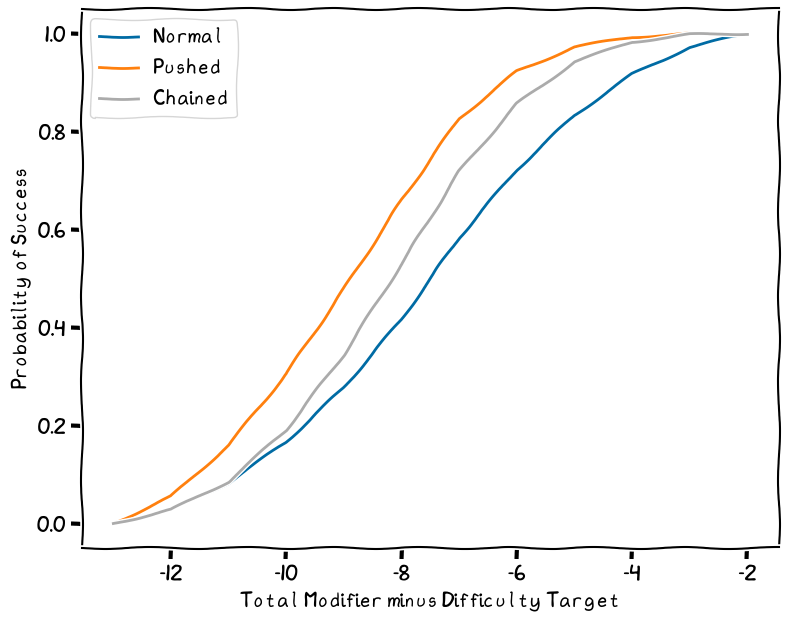 Pushing a roll is always better than doing a task chain. Because the first roll failed, the second roll in the chain will always have a negative modifier; whereas a pushed roll is just a straight re-roll. So keep that in mind if the character is really poorly suited to a situation: perhaps they should first have to climb out of the hole they dug for themselves, rather than just get a second attempt!

For example, if the PC is trying to repair something, and they badly fail, then a task chain makes sense as they now need to repair the original damage and what new damage they just caused. Whereas if the PC is trying to find a target in some surveillance tapes, failure doesn’t destroy the tapes, but trying again might cost them much more time than they’re comfortable spending, so pushing the roll makes more sense.

For opposed checks, the two characters simply roll, and the one with the higher effect wins. Though oddly, at least to me, the degree-of-success rule is not used here: it’s just the raw effect number.

Here the colour shows the first character’s chance of succeeding despite the second character’s opposition: lighter is better. 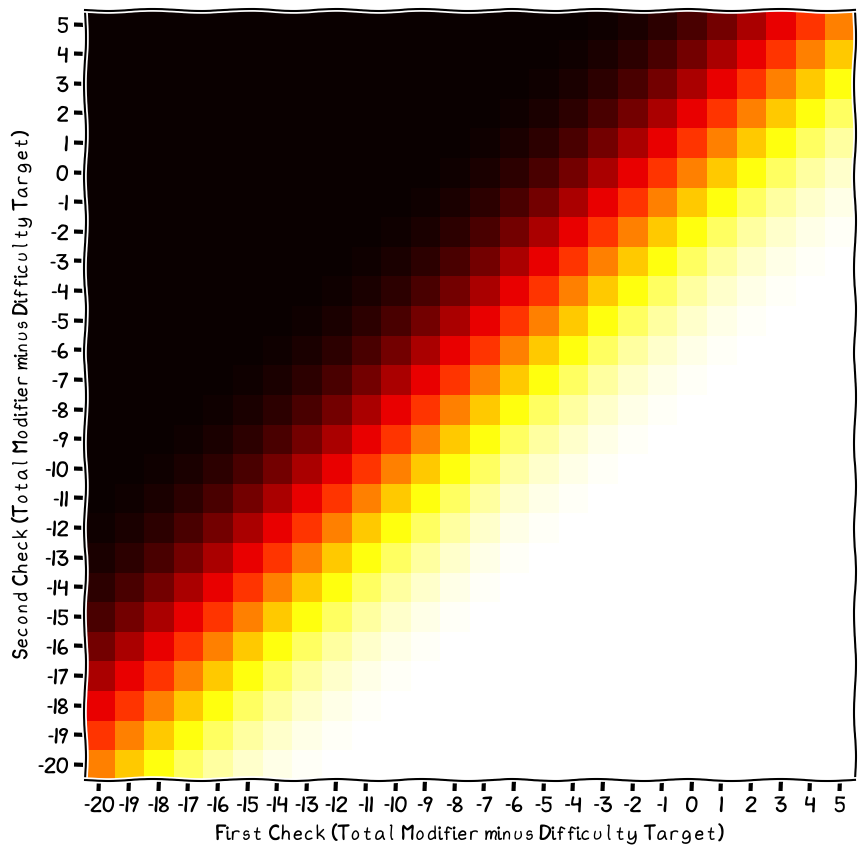 Opposed checks are used if two characters are directly competing with or opposing each other. They’re generally not used in combat (except for grappling), where the defender imposes a negative modifier to the attacker’s roll instead, rather than themselves rolling to resist. I think I prefer opposed combat rolls, but systems which do them seem pretty rare.

If it did use the degrees of success, it would look like this: 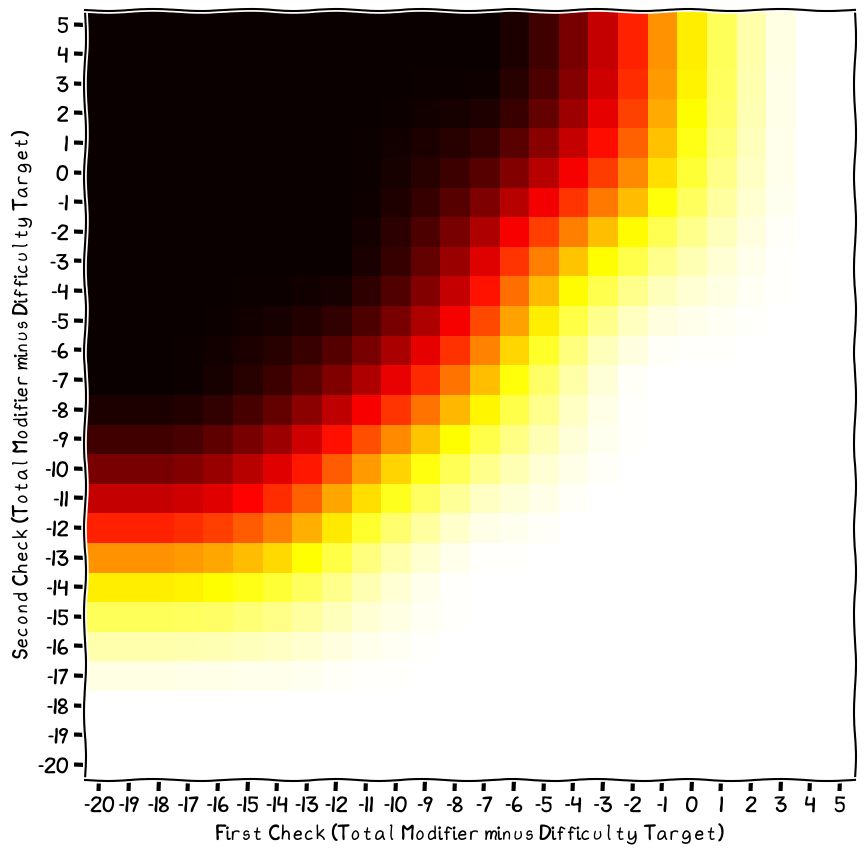 This looks like it could be an interesting mechanic to me! The second character’s ability to oppose is limited, and so the first character has better odds overall.

But, interesting as it might be, it’s not a rule. Maybe a “negative task chain” would make sense as a house-rule for asynchronous conflicts?

As always, before rolling anything, ask if a roll is really needed here.

If the task is challenging but the PC can spend as long on it as they want, shouldn’t they just automatically succeed?